Last weekend was the annual ritual. We meet at the eagle, that is, in the Grand Court of the old Wanamaker’s department store, grab a seat on the floor, and watch the Christmas light show.

The Wanamaker’s light show has evolved from state-of-the-art to retro and kitschy to sadly neglected. Over the past few years, key elements of the display have degraded into potential safety hazards and disappeared. The train and the fountains were big losses, but for me the turning point was the year the light show lost the beautifully gaudy and mesmerizing magic Christmas tree. What a tree. It stood half the height of the light board and turned every color imaginable, providing the focal point of each number, from the Nutcracker to Frosty to Rudi on drums.

Apparently, mobile clubbing is the next big thing:

the movement involves mobilising people with Walkmans to a busy commuter station at rush hour. By dancing alone to their favourite tunes in an unlikely environment, the event aims to challenge perceptions of public space while inspiring people to let their hair down.

Actually, we were doing this back in ’93. Though we weren’t using phones or walkmen, we were still ahead of our time.

Animals on the Underground, Philly style

People have been spotting creatures in London’s Underground for years. Simply by staring at the tube map, clever people discover the shapes of animals. Check it out, especially the elephant, the fish, and the whale.

Sadly, SEPTA (Southeastern Pennsylvania Transit Authority) cannot compare to the London Underground. I gave it a shot, but the best I could do is an aardvark and a bear with no butt.

Thanks to normblog for the Animals on the Underground link.

I’ve never needed a glue stick at this job, but if boss-across-the-hall has one, then I want one too. It’s very quiet over there. The door is halfway shut, but from what I can see, there is some kind of secret project involving the glue stick and a big database diagram. What could it be? 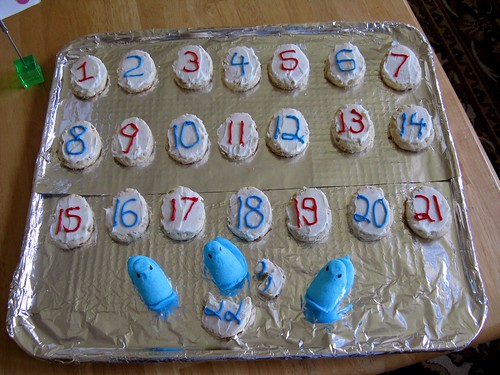 Today was The Edible Book, a fundraiser held at the Forbes Library in Northampton.

Edible Book events are held around the world, usually on or around April 1st, the birthday of Jean-Anthelme Brillat-Savarin. Apparently, this French gastronome is famous for writing a meditation on food.

The fundraiser’s premise is ingeniously simple: participants pay a fee to enter their edible interpretation of a book. Non-creators can pay a small fee to view the works of art. Celebrity judges announce the prizes, and then everyone eats.

I’m not a fancy baker or especially creative with food presentation, so I had to compete using cheap humor. Type E and I came up with several possible candidates:

I settled on Hatch-22 and was completely outclassed by entries like “The Old Man and the Seaweed” and “The Bread Pony.”  So many clever people!

Everyone got a prize, and mine was “most egg-cellent.” My kind of judges.

The Wonderful Wizard of Oz

A Book of Poe Ms

Under the Tuscan Sun

Breakfast in the Rainforest

The Old Man and the Seaweed

It is time to put these outdated prejudices behind us. We must strive to embrace all of humanity–even those people who do not dance. It is not our place to judge, and we cannot truly understand those who do not dance until we have not danced a mile in their shoes.

In celebration of the spring weather, today’s arts pick is an outdoor installation. One’s natural tendency is to decipher the image being presented. Do the bold, yellow strokes represent an abstract piece, or is there some underlying symbolism (perhaps the artist’s initials)?

This question is irrelevant. Far more important are the placement of the painting and its medium, both of which illustrate the eternal role of art in the human experience. The work is cleverly placed close to the rim of the water fountain, ensuring that it cannot be seen unless someone approaches for a drink. Because this fountain is located in a recreational area full of joggers and bikers, many people arrive and lower their heads to the source of replenishment, only to be shocked by the yellow scrawl. And it’s this encounter that the artist is seeking–a way to link his painting with the most basic of needs.

The theme of art as necessity is also reinforced by the medium. Long after the water has disappeared down the drain, the yellow enamel remains, a reminder that physical nourishment is fleeting and must be accompanied by nourishment of the spirit.

This piece is on display near the Kelly Drive grandstand (Philadelphia).

Way back in 2009, a co-worker and I were sitting outside of Huntsman Hall when we saw the Google Street View bike making its way across the Locust Walk pedestrian bridge and into the heart of Penn’s campus.

I turned to watch it roll by but never thought to check back on on Google maps.

He is busy making a PowerPoint presentation for Important People. We had words.

Boss-across-the-hall: Please review these slides.
Me: [5 minutes later] Technically, what comprises the e-mail system is incorrect. The whole comprises its parts. The parts compose the whole.
BOTH: Really? Well, I like the way comprises sounds. I’ll keep it.
Me: What about The e-mail system comprises the following items?
BOTH: Nah.