This is what the San Telmo neighborhood of Buenos Aires looks like on a Sunday: 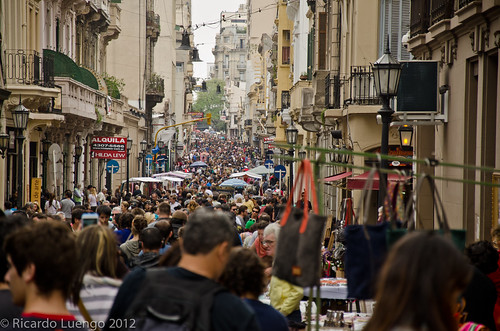 To face this scene, we needed more than those tiny cups of coffee served up at the cafés, so we did a terrible tourist thing and wandered into Starbucks. And then we really advertised our tackiness by being the only people walking around with big, disposable coffee cups.  But that was the trips’s only weak moment, coffee-wise. It’s much better to take your caffeine sitting down, like a civilized person.

After fighting our way through the Feria de San Telmo, we ended up on Plaza de Mayo, where Eva Perón spoke to the masses and mothers of the 30,000 “disappeared” in Argentina’s dirty war marched for justice.

Here’s what it looked like on a fall afternoon in 2013. The balcony on the pink house – Casa de Rosada – is the “Perón balcony”. You know, the one from Evita.

After touring Casa de Rosada and a nearby cathedral, we headed back to San Telmo, where the market vendors were packing up and the dancers were just getting started. Need a dance floor? Tape some cardboard to the concrete, you’re all set.