Why am I declaring my love for Claes Oldenburg (and also Coosje van Bruggen, his collaborator on many large-scale projects)? No reason, except that Marcus over at Oscar & Toni kindly highlighted Good Grief!’s art reviews in preparation for his upcoming trip to the Nelson-Atkins Museum of Art in Kansas City. Several years ago, I visited this museum with my friend J Bubbles and was very impressed by Oldenburg’s giant shuttlecocks on the lawn. 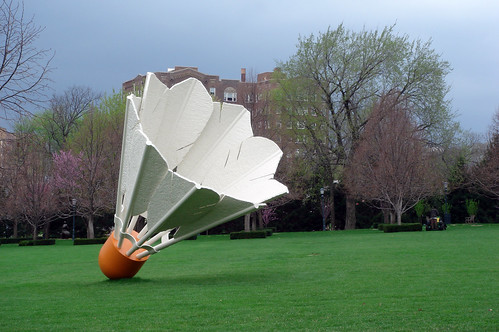 Oldenburg’s large-scale urban collaborations with van Bruggen are fantastic and fun. In Philadelphia we’re doubly blessed–there’s a giant clothespin across from City Hall and a huge, broken button on the University of Pennsylvania campus. Minneapolis has a giant spoon that cradles a water-spewing cherry, and Washington, D.C. has a typewriter eraser. Someday, I plan to embark on an Oldenburg monument trip to check out Germany’s dropped ice cream cone, the matches in Barcelona, and many others.

As you would expect, not all of Oldenburg’s proposals are well-received. For example, he wanted to build a knees monument for London’s Victoria Embankment:

In 1966 his visit to London spawned several monument proposals. As Oldenburg told ARTnews, the British capital “inspired phallic imagery which went up and down like the tide–like miniskirts and knees and the part of the leg you see between the skirt and the boot.”